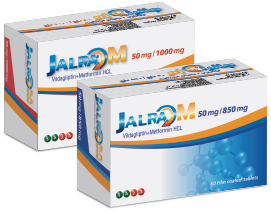 JALRA M is a medicine used to treat type 2 diabetes. It is prescribed together with diet and exercise in patients who have already received treatment with vildagliptin and metformin hydrochloride together, or whose diabetes is not adequately controlled with metformin hydrochloride or vildagliptin alone, or as a first diabetes treatment in patients whose diabetes is not adequately controlled by diet and exercise alone.

Hypersensitivity to the active substances or to any of the excipients listed.
− Diabetic ketoacidosis or diabetic pre-coma
− Renal failure or renal dysfunction defined as creatinine clearance < 60 ml/min
− Acute conditions with the potential to alter renal function, such as:
– dehydration,
– severe infection,
– shock,
– intravascular administration of iodinated contrast agents.
− Acute or chronic disease which may cause tissue hypoxia, such as:
– cardiac or respiratory failure,
– recent myocardial infarction,
– shock.
− Hepatic impairment
− Acute alcohol intoxication, alcoholism
− Breast-feeding

Ability to Drive and Use Machinery:

No studies on the effects of JALRA M on the ability to drive and use machines have been performed. Patients who may experience dizziness as an adverse reaction should avoid driving vehicles or using machines