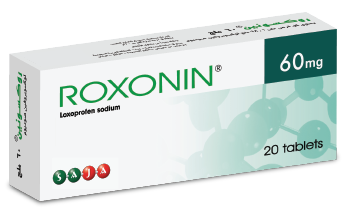 Tablets for oral use

Rheumatoid arthritis, osteoarthritis, lower back pain, per arthritis of the shoulder, and shoulder-arm-neck syndrome, toothache

ROXONIN usual adult dosage is one tablet three times a day, yet such dosage can be modified accordingly.

Ability to Drive and Use Machinery

Some undesirable effects of ROXONIN (e.g. dizziness or sleepiness), have been reported.

To be safe, should be careful when driving and using machines.

A box of 20 tablets each contains 60 mg loxoprofen sodium.

Package presentation may differ according to your country.